What is the best DAW?

A digital audio workstation or DAW is the backbone of any larger audio project, whether it is music, movie or advertising related. A DAW is largely responsible for the feel and workflow that you experience while working with your project, and therefore can make the work feel easy and enjoyable or sluggish and frustrating. It can motivate and inspire you but it can also make you quit your hobby or even lead to a career change. So which DAW is the best? Cubase? Sonar? Logic? Fruity Loops? Reaper? Reason? Or maybe Studio One? Of course everyone has their own preference, but I will still try to give pointers on what qualities you should be looking for.

Features of a good DAW

The major players in the DAW market often try to sell their products by adding new features and synth/effect plugins. Don’t be fooled by these. Most of the DAWs have already the essential features that are required for any basic work, and what comes to plugins, you are likely to find a better candidate for the specific task from separate plugins. It is nice to have some tools as a starting point but in the longer run you will not be using most of them. What is more important is that the unavoidable bugs that pop-up now and then are noticed and fixed in a reasonable timeframe. It's time consuming and frustrating to try and find temporary workarounds when the bug is fixed only after years of complaining about it.

While timely bug fixes are important, the stability of the DAW is critical. A crash in the middle of studio session disrupts the creative workflow, and in the worst case it takes so much time to recover from that the inspiration you had is gone. Even worse, if the autosave was not on as it should be, or some of the recent work is not included in the last autosave, you have to redo everything once again. You could say that the stability and the timely bug fixes are the minimum requirements, but they still are not enough to enable easy and inspiring workflow.

Perhaps the most important feature of a DAW is that it has to think the way you do, not the other way around. Being a long time windows user, I expect certain things to happen when I press specific buttons. Copy, paste, duplicate, mouse behavior and so forth. While some modifications to these might be justified and even beneficial in the long run, you should always have the option to do it like you want. For example, about ten years ago in the beginning my music production history, I tried Sonar DAW and had to ditch it pretty soon as the culture shock was just too much after Reason and Cubase.

Not as significant than the previously mentioned but what obviously contributes to the user enjoyment factor is the overall look and feel of the UI. How do the sliders and buttons react, is the color space bright or dark, is the UI scalable and whether or not the UI is a bunch of windows inside windows. The last point was one factor that drove us from using Cubase, although there were other reasons also, like the implementation of automation.

In short, here are my top 5 qualities of a good DAW: 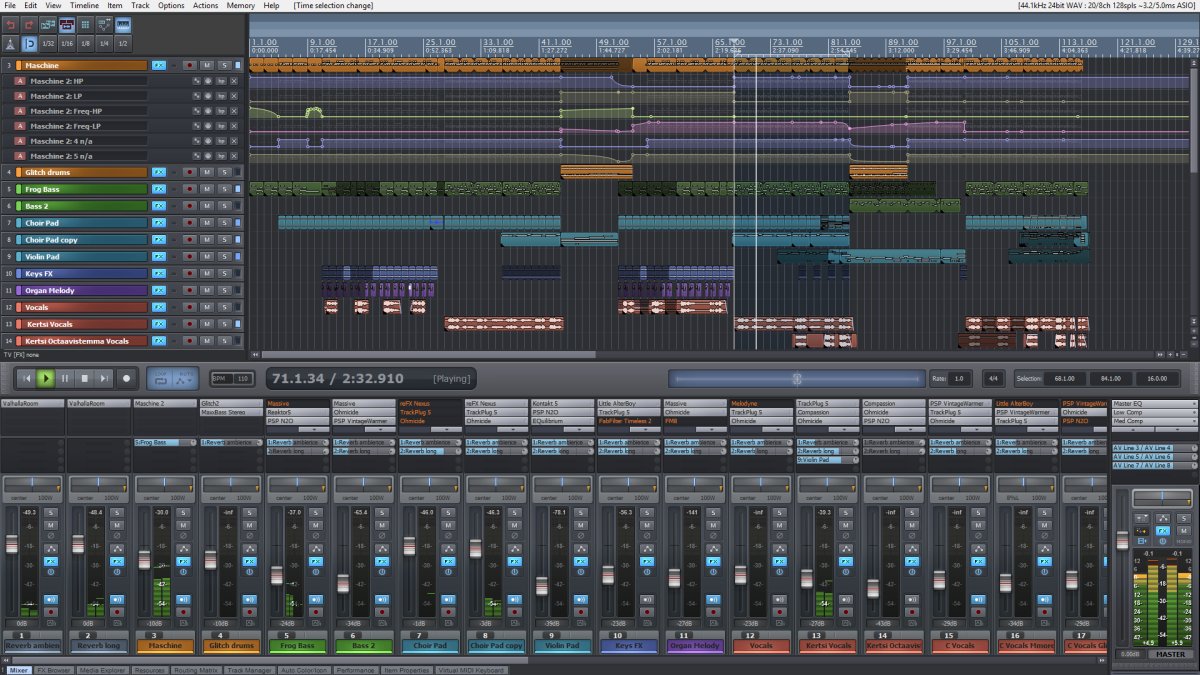 The current look of our Reaper DAW. Many thanks to Nick Moritz for the nice theme we have used as a starting point.

Our DAW of choice is Reaper. This is because it is unlikely that any DAW developer thinks exactly the way you do, so the more you can mold the DAW to fit into your thinking, the better. The stock key configurations and UI are not something I enjoy using in Reaper, but since you can practically change everything from theme to key configurations, mouse behavior and tiny details, you get exactly what you want. Fine tuning the Reaper will take some time. Fortunately you don't have to start from scratch thanks to the active community. For example, we have used the Radov4 theme by Nick Moritz as a starting point to get the reaper to look the way we want to.

Ps. Some might ask why I did not mention sound quality. The reason is that the professionally used DAWs have this point covered well enough so that this is not what limits the quality or enjoyment of your work.

Thanks for the post, I totally agree with you in that reaper is really intuitive which is exactly why I use it also! Just wondering what is the name of the theme shown in the picture? Looking for a nice theme in which the scrollbar is a bit lighter as I find the default hard to see!

Commented 5 years ago by Torporrr

Thanks for the comment. The starting point of our theme is Rado V4 by Nick Moritz. I edited the post and added the link to the theme.

Commented 5 years ago by Krister